It is the latest addition to the family of stretch laminate films (overlapping films, even partially, in order to position the laminated area on the point of greatest effort). The production process takes place at controlled temperature and pressure which, according to the invention, further improves its mechanical characteristics. Increasingly lower thicknesses to reduce the weight of the packaging to the full advantage of the environmental impact and disposal costs.

The film shows physical changes generated by the compaction areas which reduce the macromolecular spaces. These physical modifications are applicable to every class of film, even to those that will be made in the future with the new resins now in experimentation.

Longitudinal lines of reinforcement arise from this manipulation without the addition of material. This is the substantial difference that distinguishes it from the Combat 2 derived from the film Ondastretch with extruded reinforcements.

Combat 2 Press has a very high elongation and its versatility makes it suitable for use with any type of wrapping machine. Economy of use is more advantageous! This Patented process eliminates the heavier weight, about 1 / 1.5 micron in reference to 12/14 micron films. The performances remain unchanged.

The reduction in the weight of the packaging, compared to those made with the most advanced monolithic technical films, can exceed 30%

Produced with two microwave films (or with two

Bioriented) coupled, even unequal and partially

overlapped. The pigmented band traces on the pallet

a double spiral with the anti-burglary and / or identification function.

THE OVERLAPPING and SIZE of the WAVES are

MODULABLE IN FUNCTION OF the LOAD to be STABILIZED.

The unsurpassed mechanical resistance is due to the reinforcement microwaves and above all to the effect of the lamellar structure generated by the central overlap. The film has mechanical characteristics of tear resistance and laceration taken to the extreme. Its tenacity significantly reduces the number of windings.. 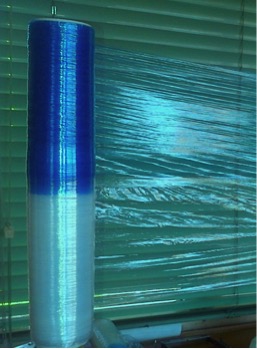 THE ONLY PRESTIRED IN BAND 500 MM.

THE MECHANICAL RESISTANCE OF THE PRE-STRETCHED FILMS

STANDARD PRE-STRETCHED FILMS ON THE MARKET.

THE FILM IS OPPOSED TENACELY TO

The two transparent bands are overlapped on the third central pigmented band. The two overlaps determine a tenacity beyond any limit for this type of pre-stretched film